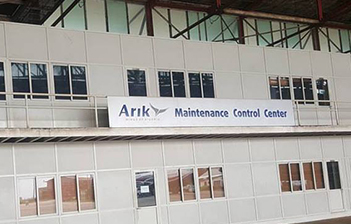 ARIK AIRLINES MAY GO UNDER WITHOUT FURTHER INTERVENTION

Strong indications have emerged that Arik Air is currently in a precarious situation caused by heavy financial debt burden; bad corporate governance, erratic operational challenges among other issues that require something drastic done immediately, to avoid the sudden death of the airline.

Lately, Arik has been embattled with confiscation of its aircrafts due to non-payment of leases, flight delays, constant fracas between Arik workers and irate passengers and endless wait by passengers at both local and international airports. In fact, the airline cannot meet its financial obligation, which is really dangerous from the point of view of safety. As a result of this barrage of problems, thousands of passengers that were returning from the last yuletide holiday period were left stranded for days at the different routes from where they were to board Arik to their destinations. As a matter of fact, the situation was even worsened by the fact that Arik happens to be the only airline that flies to some destinations in the country.

It was further gathered that the problem of the Airline, which was founded in 2002 by Sir Joseph Arumemi-Ikhide, KSG, CON; has grown from bad to worse as thousands of passengers now avoid to have anything to do with the airline, which is why insiders are hinting that Arik is on a fast track to perdition if the government and indeed all interested stakeholders do not rally round to save Arik from its present management because the implication of the airline going the way of many other before it would be grievous for the development of the aviation industry in Nigeria, the transport sector and the economy in general.

Insiders say the problem of the airline is so overwhelming to the extent that the workers cannot even get their wages, which occasionally pitches the management of Arik with the different aviation unions in the country. For instance, Arik inability to pay its workers for seven months pushed the United Labour Congress (ULC) and Engineers Union to recently shut the offices of the airline across the country causing untold hardship to thousands of travelers and embarrassed the aviation sector in the country. Besides owing the workers for months, the airline was not reporting the taxes of workers to relevant bodies thus defrauding the country.

Recently too, the Nigerian Civil Aviation Authority (NCAA) directed Arik to pay N6 million penalty for violating operation regulations over delay of passengers’ luggage. The airline was also mandated to pay $150 to each passenger whose luggage was delayed and for the inconveniences they suffered waiting for days for the delivery of their bags within 30 days.

Again few weeks back, the decomposing body of about a 30-year-old man was found in the wheel-well of Arik flight, A330-200 at the Oliver Tambo International Airport in Johannesburg, South Africa. And as a result of the lapses at the airline, the body was only discovered by engineers of South African Airways Technical facility at the airport where Arik was scheduled for a routine maintenance check.

This litany of irregularities, Arik is finding it difficult to cope because it is unable to meet its obligations with passengers, the aviation authorities, the unions and its staff because it is perpetually faced with disruptions by members of the National Association of Aircraft Pilots and Engineers (NAAPE), National Union of Air Transport Employees (NUATE) and Air Transport Services Senior Staff Association of Nigeria (ATSSSAN).

A source close to the Airline, who described Arik Air as a strategic airline in the country warned that the death of Arik at this time in our economy will heighten the hardship air travelers are going through in the country as well as make mockery of the plan by the government to create employment given the number of workers that would lose their jobs if Arik dies.